Our Christmas Elf, Elfin sat on a book shelf
Tweet

Quiet Elf on the shelf

Yesterday we found Elfin, our Christmas Elf sat quietly on a book shelf. He was still in the same position when we came home in the afternoon.

Now, that’s not like him, no mess to clean up, no endless searches in every corner of the house. After waking up with a moustache yesterday, I was initially relieved. He was still perched on his shelf in the evening and I started to worry. Was he unwell? Home sick? Bored? Had he turned into an impeccably behaved Christmas Angel?

What’s wrong with our Christmas elf?

Elfin quickly put my mind at rest – all was well. He was simply tired and needed rest! He’d had a busy year in the North Pole – even in a magic world, making thousands of toys is no doddle. Dealing with budget cuts and staff shortages added to the stress too.

So if your elf doesn’t move every night  – don’t worry. Apparently last year one elf spent all December in a large cookie jar. His children kept filling up the jar, but the elf never moved (he vanished on Christmas eve with jar).

Elfin explained why your elf might be staying on his shelf, in his cookie jar or in another place in the house:

If your elf has spent a few days without moving, here are a few things you could try: 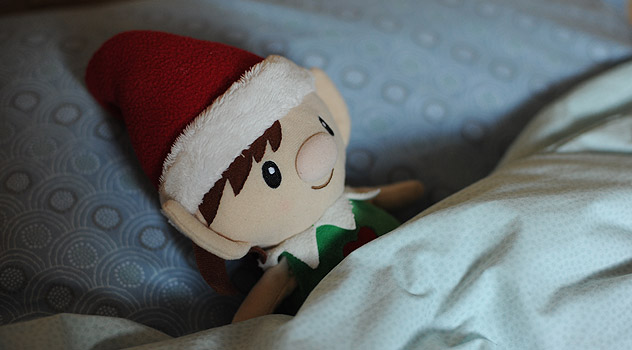 Elfin in bed. Hopefully he is not so tired after a good night’s sleep!

6 Comments on Does Your Elf Stay on His Shelf?