Our Christmas Elf - Elfin, with a batch of mince pies made following his easy mince pie recipe
Tweet

Our Christmas Elf teaches us how to make mince pies

When my son was about 6 or 7 years old, I taught him how to send a text message. A few days later I was wondering out loud how to adjust some of the settings on my phone. Before I could say anything he had snatched the phone off me and was showing ME how to do it.

This week something similar happened with Elfin – our Christmas Elf. A couple of weeks ago we taught him how to make crumble top mince pies – a delicacy that is normally banned in the North Pole as after Christmas Eve Santa can’t face another mince pie for a whole year.

Elfin loved mince pies but with his little hands, he struggled to roll the pastry, so he took the recipe back to Santa’s Head of Sweet treats – Elf Sugarplum Mary – and together they came up with an easy mince pie recipe and quite a novel way to make mince pies.

There is no need to roll the dough, so younger children can join in too. Elfin’s mince pie recipe is quick, easy and melt-in-the-mouth tasty, with a crispy biscuity dough. So much so that once you’ve tried it you might not want to make mince pies any other way!

This easy mince pie recipe makes 16 to 18 pies. You will need: 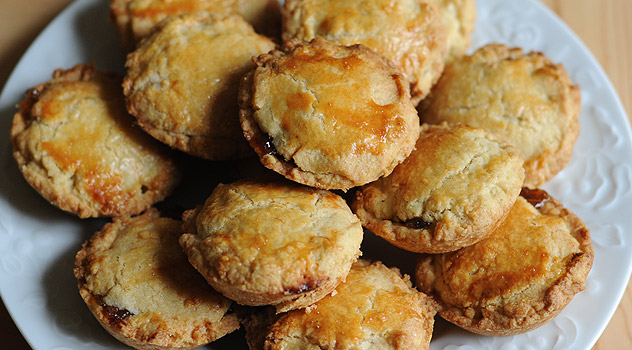 Here is how to make mice pies the easy way. Forgot to sprinkle them with icing sugar – still tasty!

Here’s how to make the mince pies:

Elfin’s tip: Marzipan lovers might want to add one small thin piece of marzipan at the bottom of each mince pie before adding the mince meat.