Our Christmas Elf attempts to escape through the letter box and gets stuck!
Tweet

We all know that Santa prefers to enter houses through the chimney. I don’t know if elves follow him down the chimney, Elfin wouldn’t tell me. He said it would spoil the magic of Christmas. I am not sure if Santa leaves through the door or  climbs back up the chimney either. However I can report that if your elf is left to his own devices for too long, he might attempt to escape through the letter box.

Caught in the whirlwind of advent activities: Christmas shopping, trimming the tree and school nativity, we had little time to look after our elf and left him to spend time alone.

Christmas Elves can create the occasional mess and like to hide at night, but they are low maintenance and it is quite easy to forget all about them!  Beware, a neglected elf will find a cunning way to remind you of his or her existence.

Elfin needs surgery after tearing his arm out in letterbox accident

We returned home to find Elfin hanging upside down out of the letter box. In search of adventure and stimulation he tried to squeeze through the letter box and got stuck.

A pull and a tug later we got him out, but quickly realised he was injured and needed major surgery. Elf Magic works wonders though and he recovered quickly… look where we found him the next morning! 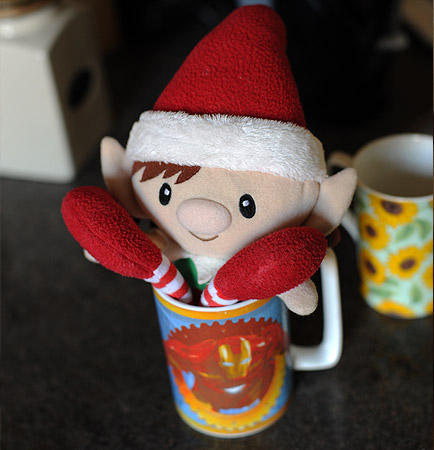 Do you fancy a cuppa?

3 Comments on Santa’s Elf Escapes Through the Letter Box (Almost!)